Skip to content
'Those Who Could Not Hear The Music'. Image: Sajal Ghosh

“In 2010, a friend suggested I work on Beethoven’s music as an impulse for a production. I discovered that I knew a lot of his music already. As I was grappling to find something that would root the production, I was advised to re-read Vikram Seth’s An Equal Music. At the same time, I came across Beethoven’s letters to his brothers. And the core of the piece was born almost overnight.”

doubly inspired by the life, music and writings of and on Beethoven,
and Vikram Seth’s novel An Equal Music

Two letters form the core of this performance. One written by Julia, the protagonist of An Equal Music to her fellow musician and lover Michael; and the other written by composer Ludwig Van Beethoven to his brothers. Both letters deal with the pain of inevitable and irretrievable loss as their writers come to terms with their growing deafness – a loss all the more poignant since it involves the one sense central to the world of music that both these individuals – one from contemporary fiction and one from European musical history – inhabit.

Drawing on several other pieces of writing on Beethoven specifically by those who knew and met him in his last years, alongside more recent responses to the composer, this experimental performance piece is a combination of text, movement, kathak dance and Beethoven’s music explores individual and collective, personal and epic responses arising out of this deep sense of loss: grief, fear, shame, love, isolation, frustration, hope, dignity, helplessness, fatigue … Beethoven’s music evokes all these and so much more of human experience with unbelievable insight, nuance, power and passion.

[all production images on this page are by Sajal Ghosh]

Anubha Fatehpuria, one of the performers in the piece and an avid photographer, created a series of photographs as a parallel interpretation of the title of the production

and the creative process. Follow this link to view a collage of these images, and read her notes on her thinking in the bilingual journal, Hakara.

“What is this in-between space of conflict and chaos – of the complete and the incomplete – of the seeming and the actual – of the interpreted and performed and the ‘performed’ re-interpreted in the performance of the photograph?”
Anubha Fatehpuria

[‘re-‘ , a visual narrative by Abubha Fatehpuria was first published in the fourth edition of हाकारा । hākārā, an online bilingual journal of creative expression published in English and Marathi.]

The research towards the production was not universally depressing.
Here’s a lighter note to enjoy Beethoven by! 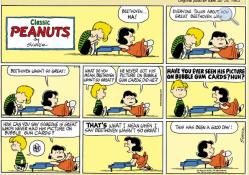