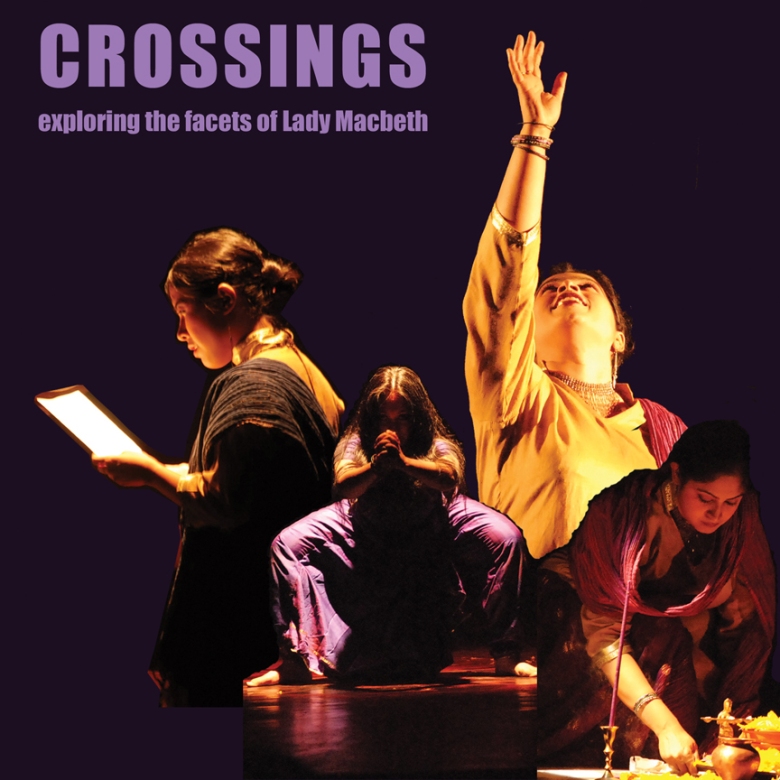 “My earliest experiment in bringing together Indian classical dancers and actors, the languages of dance / movement and text-based drama. Ranan’s first official production, the piece began as a workshop presentation in April 2004, and has evolved through several versions, revivals and cast members since then.”

Crossings is a dance and theatre production bringing together elements of Indian classical dance, movement, the original text, Hindustani classical, folk and tribal music in a piece that is as much directed as constantly improvised in performance.
Four performers represent facets of Lady Macbeth in constant conflict to create a fluid performance woven from four strands – a verbal text constructed from the dialogue of the original play, a movement text drawing from dance, a musical text created in response to both words and movement, and a symbolic text crafted from the imagery in Macbeth and the symbolism which imbues Indian classical dance. With references to figures from Indian mythology such as Putana and Shakti, this piece examines what it means to be feminine or de-feminised through the contradictions within this complex character.
Crossings mirrors the journey of Lady Macbeth through Shakespeare’s original play. She receives a letter from Macbeth telling her of his encounter with three witches who foretell that he will be King. This plants the idea of killing King Duncan – their guest – in Lady Macbeth’s mind to further her husband’s ambition. Battling her own conscience and femininity, she plans and executes a gruesome murder. But she is consequently haunted by images of blood even as she plays gracious hostess at a coronation banquet where the guests become more and more suspicious of the truth. Bereft of support and company from her equally guilt-ridden husband, her world crumbles towards a lingering death.

As a dancer deeply interested in theatre, Crossings was the first of my projects exploring the meeting of classical dance and text-based drama, to create a seamless and evocative performance language.
Why Shakespeare? Poetry, lyricism, allegory, metaphor, repetition, imagery, rhythm, representation, symbolism are all imbue both Shakespeare and classical dance. Both genres use strong and sensual images whether through a well-tuned phrase or a well-tuned movement.
Lady Macbeth is arguably Shakespeare’s most complex and layered female character. She has fascinated me ever since I studied Macbeth in school. She resurfaced a decade later when I watched a Schezuan Opera actress in a riveting solo rendition of the character. I asked, could one interpret Lady Macbeth through Indian classical dance? A mistaken notion is that classical dance must be beautiful: no, it must be beautifully performed. There is a great difference between prettiness and beauty. Dance—and indeed all performance—deals with the latter, not the former.

I chose performers who I felt would be able to contribute to this exploratory and collaborative project – dancers, musicians and an actress. We embarked on this remarkable journey in December 2003, with text, music, movement and design responding to each another in a myriad different ways, encountering parallels in Indian mythology and iconography, finding fresh possibilities in rendering both text and dance. The performance as it stands today has been distilled through several versions since the first workshop production in April 2004, and presents Lady Macbeth in all her magnificent complexity.

Audience responses, and more by the director on the creative process 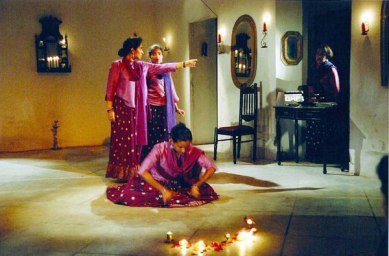